Believe it or not, I’ve just had to check my diary to see what all we’ve gotten up to this month. For a short month, it was definitely an intense one. 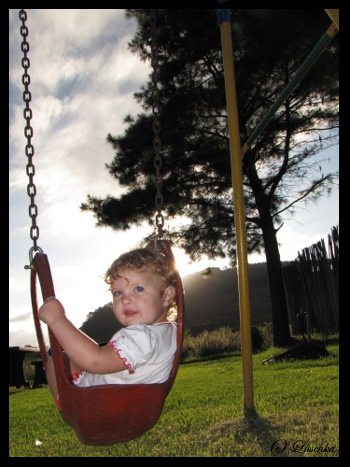 We started off by going to Crystal Springs â€“ a very beautiful resort in the mountains in the Lowveld. We swam in the heated pool, warmed up in front of the log fire, had monkeys steal food out our cupboards and had, in general, a very relaxed week. It was great, until I got desperately sick and had to be rushed to hospital. I spent the next three weeks in some or other form of recovery. I was in a hell, of sorts, with the worst pain I could ever imagine. Two weeks of bed rest later and things are looking up. I can’t eat a lot of foods, and won’t be able to have alcohol again for some time, but I’m okay with that. I’m okay, and I still have both my pancreas and my gall bladder. It could have been so much worse.

Why’m I telling you all that? Because you were such a good little girl.

The first week, your aunty Deshaine cancelled her plans to go away and spent the week looking after you. She took you out every day and cooked for you and took care of you, which of course, you loved.

The next week she was away, and you struggled a bit with being cooped up inside with me, but our part-time cleaner, a lady called Linah who loves you and whom you adore helped me out for the week that Daddy was in Spain, and you were so good about spending the time ‘away’ from me. You’d run into the room in between playing and cleaning and be excited to see me. It was really sweet.

You were also quite clingy after, once I’d recovered a bit, but I guess that’s natural. I’m just so grateful to you for making what was a very difficult time so much easier than it could have been. Thank you for adapting, even if you didn’t know why you were doing it.

You have become so talkative, and you pick up new words every day. Your hair has grown long enough to be able to put clips in it, or tie little pony tails, which thrills me. 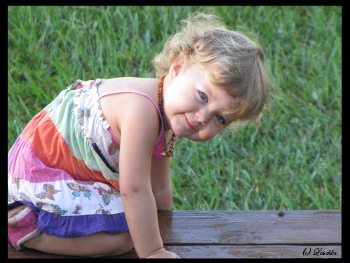 We were sitting in a restaurant in Crystal Springs, and we ordered you a milkshake. You popped the straw in your mouth and didn’t come up for air again until the cup was almost drained and Daddy and I looked at you in shock. Daddy asked you, â€œWhere does it all go, Ameliâ€ and without skipping a beat, you held your nose with your hand, looked at us, and said â€œPooâ€. Well. All you meant was that it was time for a nappy change, but we fell about with laughter. Sometimes timing really is everything.

Nanna taught you to look at the stars, so now whenever we’re outside at night, you point at the sky and say ‘Tar’. You also do that whenever you see a bright light.

You made a new friend this month too â€“ a little mottley kitten that just moved in here. We woke up from our nap and there he was, sleeping on the bed as though he belonged there. He is house trained, so he must belong to someone, and he is so good with you too. He allows you to pick him up, rough him up, and even drag him around the room by the tail â€“ although we try to put a stop to that â€“ and even if he does get annoyed, he just slightly nips at you, but never bites. I don’t know what we’re going to do, since we cant take Kat with us when we leave here, and I think you’ll miss him.

You do get very territorial though. When he curls up too near me, you pick him up and carry him to the door. You’ll drop him down with a very firm â€œOutideâ€ and then come take your place next to me. 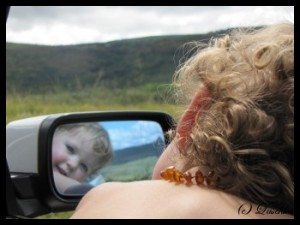 This month you’ve also spent a few evenings with your Nana and Oupa. Since they both work full-time they don’t get to see you that often, so you’ve been spending Saturday nights with them, with a bit of time either side on Saturday and Sunday. I never like dropping you off, and I love how happy you are when I pick you up, but it’s fantastic to see how close you are to them too. And secretly rather elated to see how you can turn their normally neat house into a similar whirlwind to ours.

So, here we are, in our final month in Africa. Having been ill for the best part of two months now, I’m excited about the month ahead. There’s loads more to see and do on this, our African Adventure.

I am thrilled to be sharing this life with you, my beautiful Princess.