Well, it’s Real Nappy Week. I’ve heard people ask questions during other awareness weeks about why we have them. What’s the point? I’ve heard accusations about it being a good excuse to make other people feel guilty.Â  Which is a little sad, really.Â  I read a blog post the other day about why we need these awareness raising weeks. The topic was for children’s mental health, so rather more â€˜serious’ than cloth nappies, but the message remains the same:

â€œThat’s why we need â€¦awareness week.Â  We need toÂ educate people about what works to displace what they â€œthinkâ€ they know.Â  We need toÂ call them on their ignorance and replace their beliefs with new ones.â€ Â – Lisa Lambert, PPAL 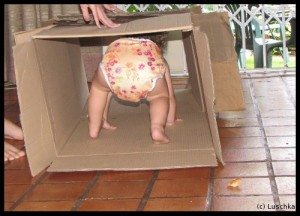 I’d like to apply that idea to cloth nappies. The moment you mention cloth nappies, people tend to turn their noses up a little, or comments about bravery, or being a sucker for punishment tend to slip into the conversation.

We need toÂ educate people about what works to displace what they â€œthinkâ€ they know.

So much has changed in the world of cloth. Real nappies have made the transition from cotton cloth squares to, well, things of beauty. But as with anything â€˜new’ or different it sometimes just takes a little education and information to change people’s minds. Whenever I take out our real nappies in public, people react with surprise.Â  They don’t expect â€˜cloth’ to be bamboo, to look like disposables, or to be pretty, cute and funky.

We need toÂ call them on their ignorance and replace their beliefs with new ones.

In the kindest way possible, of course. Well, that’s what Real Nappy Week is about â€“ raising awareness, showing people the consequences to our landfills and environment, the chemicals and plastics involved in nappy production, and the sheer cost of a couple of years in paper pants.Â  But rather than just trying to make people feel guilty it’s also about showing them different options, and bridging the gap between the expectation of what real nappy is and the reality of what it looks like in the 21st century.

So, if you know of any events happening this week, please leave a comment below, we’d love to know about it!