Today we had a lovely picnic as part of The Big Latch On in Farnham, Surrey.

The Big Latch On  sees groups of breastfeeding women come together at registered locations around the world, at a set time they all latch on their child for one minute while being counted by witnesses. The numbers are added up and see if we beat previous Big Latch On records or maybe even the world record! Last year there were a total of 5687 nursing mothers in 412 locations in 5 countries.

At the time of writing – half way through the two day event – there are already 3503 breastfeeding children (allowing for tandem nursing!) in 624 locations over a whopping 23 countries! What an incredible increase in participation!

At our first ever Farnham event we had 12 breastfeeding mums and 13 nursing babies. 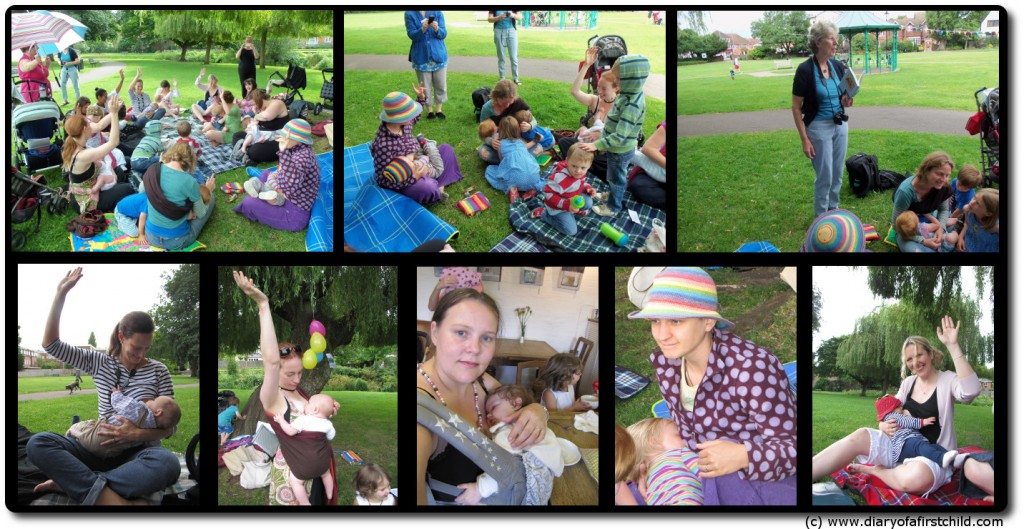 And so it spread to the UK. Someone asked me today where I heard about the event, and I honestly don’t remember! I’m just glad I did and glad I was able to organise it.

Sitting there today, feeding my Aviya with the other mothers, I felt such a bond with not just those in our meetup, but with mothers all over the UK feeding at exactly the same time, and with those across the world nursing their babies at 10.30 local time throughout the world.

I know it wasn’t just me, either. One of the mums who attended wrote on her feedback form that it had a “lovely community spirit” and another wrote that the event “felt special”. I was proud, today, to be among mothers who are changing perceptions and changing the future for breastfeeding mothers in the gentlest way.

Naomi Stadlen writes in her new book, “How Mothers Love” (US here) about how mothers can be a force for change.

“The political role of mothers is also changing. Every society owes a great deal to the work of the mothers. We could exert an even stronger and more conscious social and political influence than we have recently started to do. I often wonder if people are afraid that we might.“