The first thing I noticed about gNappies is their size. You actually can’t tell the difference between disposable nappies and gNappies as far as size goes. They are superbly streamlined, which is fantastic for lengthening the lifespan of your child’s clothes.

gNappies come in three parts: The gPants (what would be the wrap in other nappies), the liner â€“ a waterproof layer inside the gPants and then the inner, which is either gCloth or gRefill.

The gCloth is a made from hemp fibres, which absorb 15% more moisture than traditional cotton, and is three times stronger than cotton of the same weight, apparently. Hemp is also antifungal, antibacterial, and non-allergenic and is a sustainable product.Â  The other side of the gCloth insert is polyester microfleece which makes it all nicely absorbent.!

The alternative to the gCloth is the gRefill â€“ a biodegradable, soft, trim-fitting insert that is plastic-free, elemental chlorine free, latex free and perfume free, which is great for babies with sensitive skins.

While in the US, gDiapers can be flushed, I guess in the UK our pipes are a bit too old, and the disposable inserts aren’t recommended for flushing. Dirty nappies can be tipped into the loo and the insert binned, and clean nappies can be home composted.

So â€“ doesn’t this still add to the landfill problems? Well, no. Watch this clip, which shows the way gRefill’s break down and return to nothing within two to five months.

From a usage point of view, the gNappies are pretty easy. They’re quick to prepare and don’t take up a lot of space, which is sometimes a problem with other cloth nappies. They look fantastic â€“ sleek and slender â€“ and we’ve not had a problem with leaks when they’re worn for 2 â€“ 3 hours.

For us, gNappies are not an overnight nappy as they do need to be changed every few hours, and my little girl tends to be very wet overnight. You can boost them by using both the gCloth and the gRefill though, which I’ve not tried.

gRefills are just under Â£10 for 32, making them around 31p each (a quick Google comparison show a leading disposable brand ranges from 13p to 33p [from products checked]per nappy) so it’s not the cheapest option, but also not the most expensive at all, and ideal for travel or days out.

Husha Byebaby are the sole distributors for gNappies in the UK and although they’ve only been on the UK market for a short while, gNappies have already won an award for Product of the Year 2011 from Sustain Magazines.

In contrast to some other nappies I’ve used, there’s also a lot of information and FAQ for use, treatment, and care of your gNappies.

In honour of Real Nappy Week, Husha Byebaby are offering Diary of a First Child readers a chance to win a 2-pack of gNappies with a set of gRefills in the size of your choice (worth Â£44.95). To stand a chance to win, go to Husha Byebaby, choose your favourite colours and come back here and let me know which TWO-PACK you prefer as well as the size you’d require. 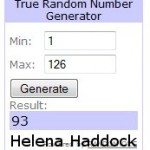 (By the way, Hushabye Baby also currently have a 15% discount on everything in their store.)


The competition ends on May 31st, at noon and the winner will be drawn at random using Random.org.

THE WINNER IS: HELENA HADDOCK


You do not have to tweet or share this competition to enter, but doing so helps ensure that I can keep bringing you giveaways! You can subscribe to Diary of a First Child by RSS or email. You can also follow us on Facebook or on Twitter. We hope to see you back again soon!