I’m 23 weeks pregnant today, and in the back of my mind I’m starting to think of baby names. I must admit that it’s not something I enjoy thinking about. I should, but I don’t. With Ameli, we didn’t know her gender until she was born and as a result we found it really difficult to choose a name. She stayed ˜Button’ for five days after birth. We don’t know Squidgy’s gender either, and rather than put myself through the stress of it all again, I’ve decided to not even think about it until I’m holding my bundle of Squidge in my arms. Yeah right. The thought does cross my mind, and every now and then I catch myself paying close attention to the credits at the end of a movie to see what other people are called.

It was such a nightmare finding one name we liked, now we have to do it all again?! 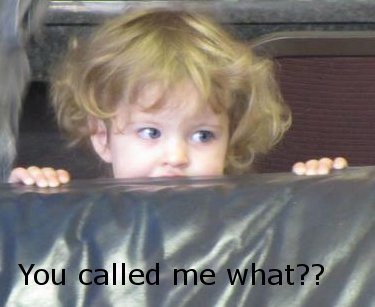 Half the problem for me is that I believe that words have impact and what you call a child can have an impact on who and what they become. I’m not the only one either – there was a study a while ago that concluded that the spelling of your name could affect your future!

Then there’s the meaning of a name fortunately the internet is full of lists that will tell you the name meanings and yesterday I was at Farah Kids buying some winter clothing for Ameli and I glanced over the book section – it was full of baby name books. There was one on potty training and the rest were just about what to name your baby.

In a way I envy people who know from conception or before what they will be calling their children. It seems so much easier.

So, I’ve been doing what I do and analysing what’s important to me in the naming of my baby:

I’m sorry. My name is Luschka. I can’t be mother to John or Sue. Both lovely names, but not for me. I loved having an unusual name growing up. I don’t remember ever being teased for it. I loved that they could never find my name in those supermarket ‘what does your name say about your personality’ machines. I liked that it didn’t define me or pigeon hole me.

2) Meaning.
A name has to have a meaning, for me. I have to agree with the meaning. I have to like what it stands for. I have to hope for it’s associations for my child’s future. (Think Hitler then think Theresa or Diana. Most names have an association.)

3) Familial history.
Well, I always said if I have a son, his middle name would be Ed, after my uncle who was murdered 11 years ago. So for a boy, it has to go with Ed. But that’s the only familial ‘tie’ for me. None of the rest of our families have names that I really want to pass on – not because they’re not good people, but because none of them match criteria number one. Many parents are also choosing short four-letter names now as they are so cool, have a look at https://kidadl.com/baby-names/inspiration/fantastic-four-letter-names-for-your-new-arrival for the best ideas.

4) Fit.
This is actually the most important point, for me, but one that doesn’t apply until after the baby is born, and I have had a chance to look into his or her eyes.

How did you choose your baby’s name? What was the important criteria for you?

4 Ways Parents Can Help Kids Make Healthy Choices
Zulily Discount Code For Readers – Expires 17 Feb!
The McDonalds Ad That Shows How We Have Childhood So Wrong
If you follow by RSS, please update my feed address