I know this is an odd thing to do – write a birth story before the baby is born. But, I’ve been waiting for you so long now, I feel like this needs to be a two part story.

By scan dates, I’m now at 42 weeks and 4 days. To say the medical professionals are getting nervous would be an understatement. By my dates I’m now at 40 weeks and 4 days. If you look at the early letters I wrote you, there was a two week discrepancy in what they said the dates were, and what I thought they were. I made the decision to go with their dates. I regret doing that.

Ameli was born at 40 weeks and 6 days, so I’m hoping you’ll decide to show on or by Wednesday.  Particularly because I really don’t want to have another scan.

So, why’s this part one of a birth story?

Well, since my forty week appointment, I’ve spent more time under medical attention than I have in the entire pregnancy so far. I’ve made the decision to ‘play along’ with their monitoring, so we can keep an eye on you, but I’ve put my foot down on induction.

At 40 weeks, I had a lovely acupuncture session, which led to an evening of contractions, but no action.

Since then, I’ve seen the midwives three times. Our lovely midwife, Jane, has hurt herself so at 40 weeks and two days I met a new midwife, Tanya, and she did a sweep for me. I had contractions for a few hours, but nothing else. I was not at all dilated yet.

At 40+5, we listened to your heart rate again, and checked all my vital signs. Nothing to worry about.

At 41+6 I had to go to the hospital where I had a meeting with the hospital’s registrar. She did palpations, and a VE and found I was a cm dilated, but the cervix was still thick.  She did a sweep, which bled a little, but nothing interesting happened. I had a few contractions again, but they too went nowhere.

I had a scan, and was told you were 8lb2oz, so a rather average rate for a 40 week baby, never mind an almost 42 weeker. (I know scans are inaccurate at the best of times so I’m not putting too much weight on that anyway. I was told Ameli would be huge. She was 7lb7.)

At 42+1, I had a CTG. It was perfect. There’s nothing wrong with your heart or your movements. No one is in the slightest concerned about your ‘vitals’.  Unfortunately afterwards I had a less than pleasant meeting with the head midwife. I know she wants to help, but I was very upset by the meeting. She wants a happy baby. So do I. But I also want a happy mama. I also want a future where I don’t regret the choices I made around your birth.  I was at the hospital for three hours longer than I needed to be, two of them spent hearing about the dangers of being post dates. It was only when she realised, hours later, that I never had the dating scans, that she let me go, saying that I could be right. 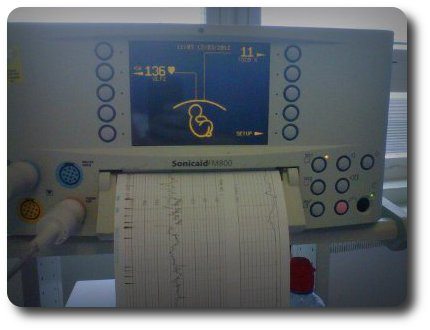 I’ve spent the weekend waiting for you, hoping for you, and today I had another CTG, which was fine. We’re now at 42+4 by scan dates, 40+4 on my own dates, and you’re moving all the time. I stopped ‘counting the kicks’ by 10am because you’d moved more than 10 times.  A bit low in the beginning, and a few dips, but nothing anyone was worried about. I had another sweep, where I was told you’d lifted a bit and weren’t as low down as you had been. There’s also no further dilation. I went home, and we spent the afternoon with friends at a local winery, before I came home for an acupressure appointment. It was wonderfully relaxing and the labour points were pretty intensely sensitive.

I’m not unusually uncomfortable, I’m not fed up. I’m none of those things. I just want to hold you, baby. I want to give birth to you. I want to nurse you and I want to look into your eyes.

Come to me baby. I’m waiting for you.