It has been so many months since I last wrote to you, and I feel absolutely awful about that. You have changed so much since we arrived in Australia. You’ve gone from just pushing yourself up on your arms to walking properly, without assistance, and sadly, I’ve missed out writing about so much of it. I’ll make it up to you though, sweetheart. 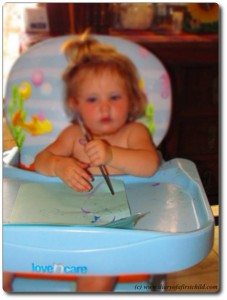 You’ve adjusted to life in Perth incredibly well. You manage the temperature well, and while you wake up covered in sweat some mornings, you’re doing pretty well. You spend a lot of time just in your nappy, and you’re okay with that.

Aviya, you are the smiliest child I’ve ever had the pleasure of having anything to do with. I never thought Ameli was miserable or anything, but I don’t remember her smiling about everything. You do. You smile almost all the time. Your eyes light up, your face brightens. Your beauty radiates. And yes, you still look like a pixie, and you still make my heart melt.

You have begun to show so much character over the last few months, and while you are smiley you also have a temper that can scare the pants off an unsuspecting onlooker. Wow. When you get mad – like at the water bottle for not having water in it, or a toy for being stuck under furniture – you get mad fast, and loud. It’s impressive.

Milestones you’re knocking out the water too. You didn’t crawl for very long, but you crawled, and then on the 20th of December, you took your first steps, holding on to my hand – actually you were pulling me towards the water in the waterpark in Geraldton. You wanted to get wet and really, all holding your hand was doing was slowing you down!

On Christmas day – your first Christmas – you were beautifully dressed in a white dress with golden butterflies. You looked so lovely, but you were a bit miserable whenever anyone tried to pick you up. We didn’t know why, but when you were on your own you were okay. It was unusual for you, but we were all doing Christmassy things, so didn’t think too much of it.

You spent a lot of the day pushing around a heavy chair. You were ‘walking’! You pushed that chair up and down the room. I was so proud of you.

All in all, I’d say your first Christmas was good, apart from the fact that you were a little tearful at times.

The next day you screamed every time anyone tried to pick you up, so I decided enough was enough, and took you to Perth Children’s Hospital. After an x-ray, we discovered you’d broken your scapula! I don’t think I’ve ever felt so bad about anything in my life. My poor baby! You were crawling around with a broken shoulder for days! No wonder you were miserable!

We tried to put a bandage on you, but you weren’t really having it, so you had to go without it, eventually. Thankfully it seems to have healed by itself and well. You don’t have pain anymore, at least.

You spent much of January walking holding on to someone, walking along the furniture and pushing furniture to where you wanted to be. Your confidence has grown massively, and we knew it wouldn’t be long till you took your first unassisted steps. And on January 23rd, you did! Almost a month after your first assisted steps, you took your first steps all on your own. Hesitantly at first, and you plopped on your bum a lot, but at 10 months and 10 days, there you were: my toddler.

By a month later, you don’t crawl anywhere anymore. You just walk now, confidently and beautifully. It’s a quick transformation, and while I mourn the end of your babyness, I am loving watching you grow into a little girl.

Nana asked me the other day howcome I haven’t really done any baby signing with you, while I did a bit of it with Ameli. It’s an interesting question, and I’m not sure whether I have changed and am just more perceptive of your needs than I was first time round, or whether we just read each other better, or whether you’re just better at expressing your needs. Maybe it’s a mix of all three. Today, for example, you are 11 months and two weeks. You wanted a cherry tomato out of the bottom compartment of the snack box. You brought me the snackbox, and tried to climb on top of me. I opened it and offered you some hot cross bun. You shook your head, vigorously enough that you plopped down on your bum, off balance. So I offered you the cherry tomatoes. You took one, wombled off, plopped down and ate it. Then you came back to me, climbed on top of me again and we repeated the process. 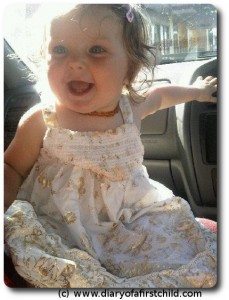 What I will say, though, is you have a MEAN temper. When I don’t get your wants right, yu’re not shy in letting me know.

You’ve spoken your first words over the last couple of months too. It’s really cute. You crawl or walk through the house saying ‘Opa. Opa. Opa.’ That’s Oupa, or grandfather. It’s really sweet. When you see him your eyes sparkle, your face lights up, and you radiate your beautiful smile. You do love him.

You also say Kyra – although it’s more ‘AYA’, but you like it when she answers your call too.

And then you wave. You wave at everyone. You say ‘ALA’ loudly, and wave. It’s beautiful.

I’m not sure what happened to Mama or Dada in your vocabulary, but I’m sure they’ll come.

You’ve started having solids, but not much. You’re still mainly milk fed, but you will anihilate a cherry tomato as well as the next guy. Same with pasta and bananas. You also really like Pronutro porridge, but so far I feed it to you, because baby led weaning is really only acceptible so far in someone else’s house! You have six teeth now, and seem to be constantly working on new ones.

You are a lot more ‘attached’ to me than Ameli was. It’s rather nice, actually. In a playgroup or park or around other people, you’ll stay by my side, playing with whatever I have on hand. Occassionally you’ll follow Ameli into a sand pit or something, but for the most part you stay close. At this rate, she’ll be the one who makes friends, and you’ll be the one who sits at home reading a book. That’s fine. I’m happy with both those girls. I’ve been both those girls at different times in my life.

You’ve taken everything we’ve thrown at you so far these last four months entirely in your stride. You moved rooms without it distrupting your sleep too much. You’ve had accident and emergency and still, carried on smiling. You get super excited when you see Daddy on Skype and while you don’t ‘talk’ to him, you spend the whole time waving and being generally excited.

You are an absolute pleasure. A treasure and a joy to be around. Your Nana loves spending time with you and your Oupa adores you. You make him smile, and I think you bring him great joy.

Keep doing what you’re doing my beautiful pixie girl. It’s your first birthday soon, and I’m holding on to you as tightly as I can right now.

You are my beautiful Avi, and I love you.