You know when you have one of those days where you just can’t wait for bed time to come? Yeah, I have those too. A couple of weeks ago we were having one of those when the postman  rang the doorbell. He had a large parcel for us and we were excited to open it!

Inside we found the rest of the afternoon’s entertainment, and the whole tone of the day changed! Now, I’m not saying you should go out and buy toys every time you have a rough day – that would be terrible, actually – but in this instance it was perfect!

It looks like Dora is having a makeover on Nickelodeon as new friends are being introduced – I’ve only ever seen the episodes with Dora and Boots and Backpack, but in these new episodes, Dora’s friendship group has expanded to include some other girls.

One of these is Alana, and in our big box of Dora fun, we received the new 8″ Dora doll and the new Alana doll. We also received two different versions of Dora’s well-known charm bracelet, and a mobile phone.

This new range of toys from Fisher-Price launches today around the UK and includes 5 different ‘friends’ dolls. These dolls are actually quite beautiful. They have those weird big eyes that look really creepy on some dolls, but because of the oversized heads, they seem to fit really nicely here.

Despite the big eyes and head, they actually look pretty, and not creepy or weird at all. The arms and legs are poseable, which means she can stand or sit or ‘walk’. The ah-ma-zing thing about these dolls, however, is the hair. It is so soft, I honestly thought it might be real hair at first. My daughters have spent hours brushing Dora and Alana’s hair.

This series of dolls is a lot more grown up than the pre-school series. I do find that a little bit sad as I don’t want my girls to grow up in the same ways just yet, but it would definitely make Dora appeal to a wider age range in general. While the girls are dressed like characters from the new series, they just look like little girls dressed up for an adventure.

Each doll comes with a charm which can be interchanged and added to the Magic Charms Bracelet. I’m not crazy about the design of these as the joint for connecting the charm to the bracelet is underneath each charm meaning they stand up perpendicular to the arm, making them look easy to knock off and subsequently lose. That said, we haven’t actually lost any yet, so maybe they are sturdier than they look.

Each doll also comes with removable clothes and shoes. This is great for normal kids. For mine it means we have two naked dolls roaming around the house, and four missing shoes. This is a flaw in my children though, not of the dolls.

At £10.99 RRP I think the Dora and Friends dolls are really good value for money. They are quite beautiful. 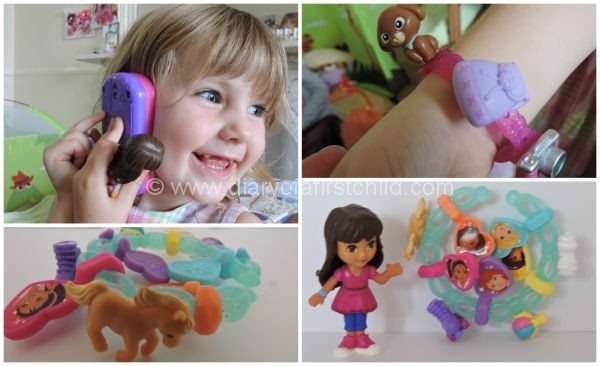 The Magic Charms Bracelet (£9.99) consists of a chain link plastic bracelet, with 5 charms containing the girls’ pictures, almost like lockets without the cover bit. In between those are the special adventure charms that are like the ones on the show. There’s a backpack, star, horse and loads of other things.

The final toy in our box was the Dora Smartphone. My 3 year old loves this and walks around the house having conversations with anyone and everyone on her phone. It’s a ‘touch screen’ phone which plays incoming calls and voicemails from Dora and her friends when pressed. Kids can pretend to take photos and use the Map App with the phone, which looks just like the one from the show.  The phone plays ringtones, bilingual phrases and songs.

We were sent these Dora and Friends toys from Nickelodeon and Fisher-Price to review. Thoughts are our own.