In a Boxing Day bid to get everyone out of the house this morning, we went to our local cinema to watch The Good Dinosaur, Pixar’s latest contribution to movies for kids.

I’ve always loved Pixar movies, so I generally go into them expecting it to be for the kids, with comments and suggestions thrown in for adult enjoyment too, and Pixar doesn’t disappoint in this film. 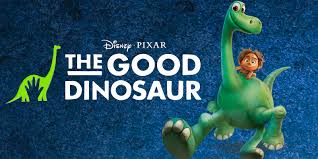 ***** This part describes the movie and may contain some spoilers****
The Good Dinosaur is a story about a smaller-than-average dinosaur, the youngest of three, born to a farming dinosaur family in a world where a meteor didn’t hit earth and dinosaurs aren’t extinct. The youngest dino, Arlo, is scared of everything, even though his daddy is very supportive and believes that he’ll ‘make his mark’ yet.

As life happens in the stories, Arlo’s dad is killed in the process of teaching him a valuable life lesson, and life on the farm becomes hard. Before long, Arlo is swept away on a torrent of water, and begins his arduous journey towards home, growing and changing and learning from his experience in the wild as he goes.

Arlo comes across various ‘bad guys’ and defeats them, befriending human-with-dog-like-qualities “Spot” along the way. Previously his nemesis, Spot becomes Arlo’s best friend, and before Arlo finds his family again, he helps Spot return to his own kind. Arlo returns home where his mother initially mistakes him for his father, before realising it’s her son returned, and everyone lives happily ever after. It is a children’s movie after all

Since watching the movie I’ve read a few reviews on it, and I’m surprised by the hysteria this movie has caused in some sectors. My children aren’t exactly die-hard, cold hearted monsters, but we didn’t cry from fear or emotion. My three year old did require a lap though as some parts were a bit scary.

What we loved about The Good Dinosaur

There were some really funny parts to the movie, in true Pixar style, more aimed at word play for the adults than for the kids. I did have a good laugh at parts though.

I also thought the visuals were quite stunning – the world as the dinos know it is really beautiful. Many of the most emotional scenes – and there were quite a few – didn’t require any words, or consisted of grunts and howls, but were made beautiful by the visuals. It’s a real credit to the illustrators (are they called illustrators in movies?) 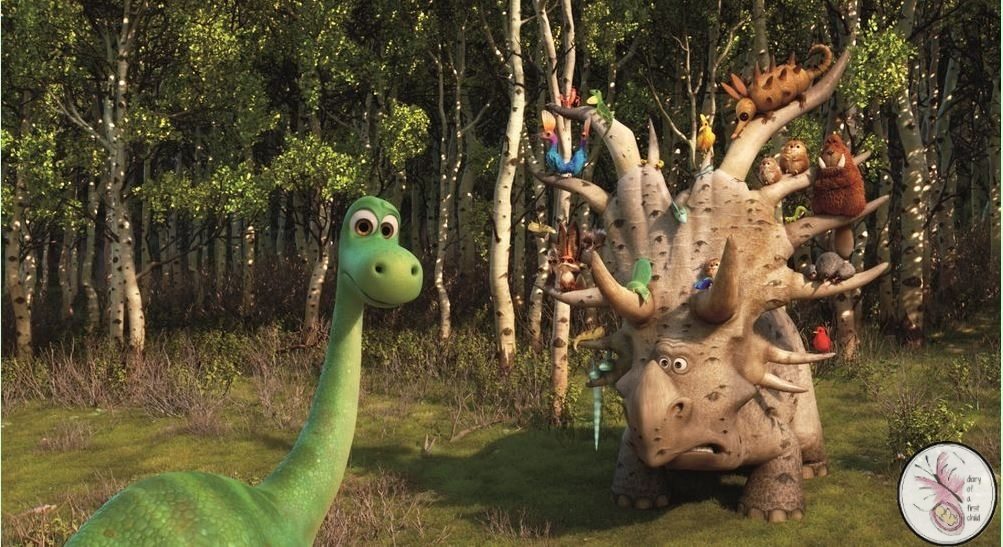 What we weren’t sure about in The Good Dinosaur

I found the villains in this movie to be plentiful and quite extreme. Aviya (aged 3) thought it was scary in a lot of places. On a positive note, the villains mostly had a Randall (from Monster’s Inc) quality to them, so you knew what was coming.

I wasn’t sure about the hallucination causing fruit either!

Also, I didn’t dislike it, but I did think the action scenes were quite intense for a movie aimed at an age range where kids are easily frightened. It was quite full on with things happening quickly, one after the other, quite dramatically at times and a bit more animatedly violent that we’re used to from Pixar, or than we expected. It’s not a dislike, just a *be aware*.

The Good Dinosaur reminded us of…

The major themes of The Good Dinosaur were…

Friendship, love, family, giving someone (something) a chance, facing your fears, working through your fears, making friends with someone who’s different to you.

The movie doesn’t leave you feeling like Arlo and Spot ever see each other again, which did leave me feeling a bit hollow, but it does a beautiful ‘circle of trust’ (I can see Robert De Niro in my head there!) thing to depict family. It is very emotional though, what with the death of parents, a toddler left to (quite successfully) fend for himself in the wild, and loss is quite heavily featured throughout the movie – including the zen-ish Styracosaurus Forest Woodbush, who surrounds himself with protective beings with names like Fury, Destructor, and Dream-Crusher, making him quite a dark character too.

Favourite quotes from The Good Dinosaur

There are loads of good quotes that have come from The Good Dinosaur like: 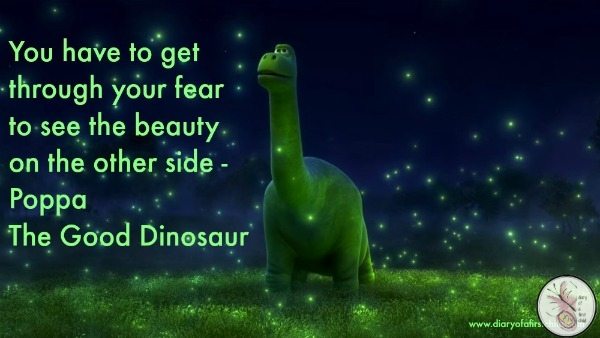 but my favourite is from Butch, the T-Rex with a crocodile bite on his face: 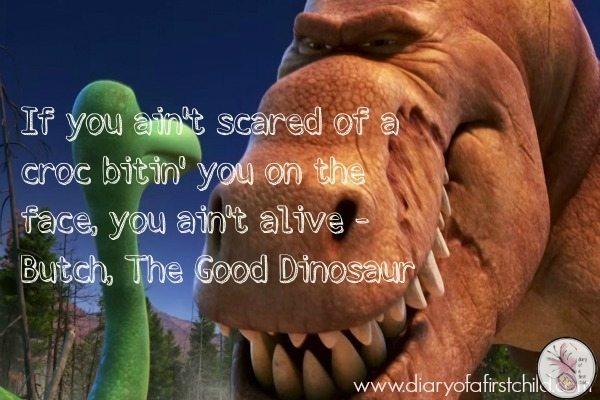 Well, it’s true. Not a fear I’ve lived with thus far, but true none the less!

Have a look at the trailer – though don’t put too much stock in it. It’s a lot ‘fluffier’ than the movie really is.