We’re talking about feelings and emotions at the moment, because both seem to be running high with my four-going-on-fourteen and six-going-on-sixteen year olds. Sometimes its hard to know what really sinks in, but this evening as we were climbing into bed, my youngest was becoming shouty, then stopped herself and said “Mommy, I’m feeling sadness” – the sadness was about going to bed, which was promptly ended by falling asleep, but it was progress, still!

I saw a picture of window charms made from melting beads somewhere recently, and it struck me as a good way of showing how different emotions and feelings can be amassed in a melting pot to make a life – spend the majority of your days angry, and you’ll have an angry life. Spend the majority of your days joyful and you’ll have a joyful life. (With the obvious exception of mental health concerns.) I wanted to demonstrate this visually.

First I rummaged around for a variety of beads and poured them into a muffin case and labelled each colour on the tin.

In our example I used white for happiness, pink for joy, light blue for sadness, dark blue for anger, dark pink for fear and orange for disgust – these being the six major emotions. 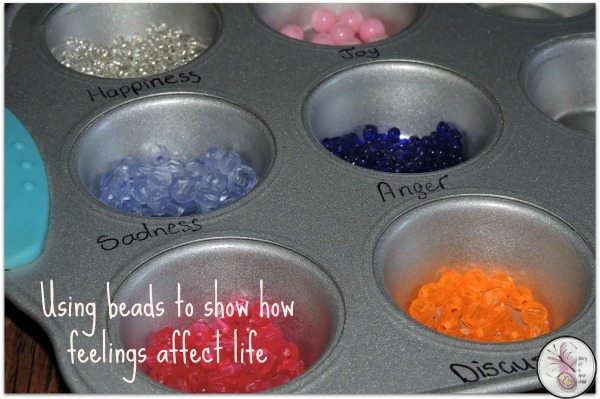 I used an empty spot to demonstrate my life, adding beads to it as I went along:

“My life is generally happy [adding white beads], but there have been some moments of true joy, like when Ameli took her first steps, and when Aviya first laughed [adding light pink beads]. There have been some real sad times in my life, like when Nana died [adding light blue beads] and some anger too, because of that [dark blue beads]. I’ve not had to deal with much disgust in my life, except maybe nappies! [adding an orange bead]. I do have a fair amount of fear sometimes, like when I know there isn’t enough money to go round, or when I worry about what’s going to happen in the future [adding dark pink beads].”

Having done this, I sat back and let the children fill their own muffin cases – when you’re choosing colours, be mindful that sometimes children just choose their favourite colour, so perhaps avoid firm favourites!

I noticed specifically that the four year old was considering specific incidents, (hence all the disgust beads and fear beads in the bottom right) whereas the six-year old had a better grasp of the overall feeling. Irrespective of their understanding though, it was a great way to assess their feelings in general.

It could be a great thing to do at the end of every day – perhaps each person has their own jar that they drop a few beads into as they discuss their day? 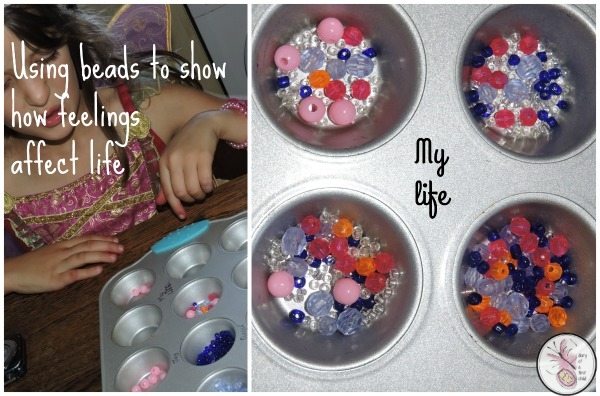 Notes on melting: I’m not sure about the toxicity of melting plastic, but it does make a terrible stink, so make sure the kitchen is well ventilated before you start melting the beads.  Plastic beads melt faster than glass beads, but the glass beads stink less and probably give off less toxic fumes. 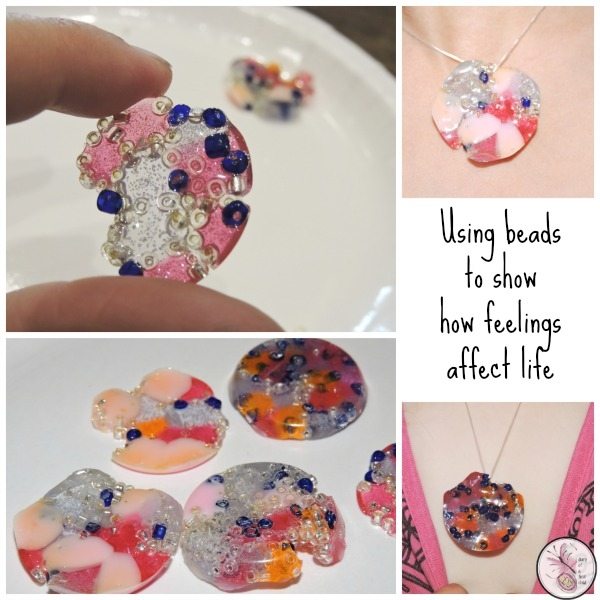 When it comes to discussing the beads at the end, we found the plastic ones had melted quickly, but the glass beads – white and blue, aka happiness and anger – took longer to melt and still retained some of their original shape. We also saw that the blue beads specifically left holes in disks, which also made them weaker – the disks broke easier in the ones that had lots of blue holes – which worked really well at explaining how anger is damaging, and makes us weaker in the long run. Ameli also used a lot of the blue beads in her disk which had the effect of causing the white to become a little discoloured – all that anger is bound to influence the happiness in our lives.

Truth is though, whichever colours you choose, you can manipulate the narrative to make it fit the lesson you’d like to teach! It’s a versatile subject.

Next time we’ll make them thicker so that the whole surface covered – they didn’t ‘run’ as much as I thought they might. We were able to use the holes in the ‘anger’ beads, though to thread a bit of string and turn them into necklaces which made the girls quite happy!

For more feelings and emotions based activities, click on the image below: