We’ve had three camping trips, visitors, sickness and all sorts over the last couple of months, and while it’s been fun (and not) one of the things that’s suffered a fair bit has been any sort of ‘blog schedule, and with it, some of the things I’ve been promising to write about – like the BABYBorn Interactive Bath Tub my girls received months ago now! 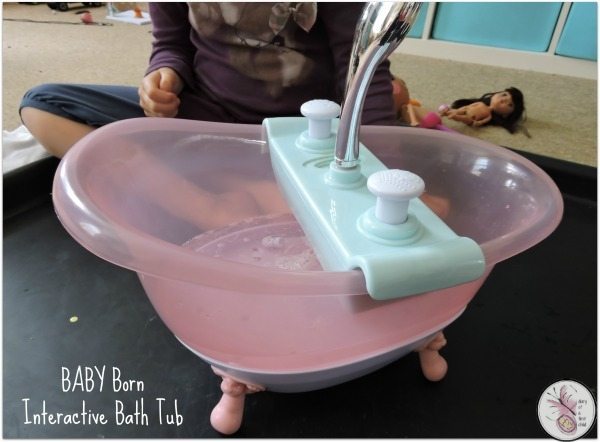 Well, the good news is that it became such an integrated part of the toy box as the kids incorporate it in their imaginative play fairly often.

The BabyBorn Interactive Bath Tub is pretty much what it says on the tin: a plastic bath tub, that gurgles like a bath running water. More exciting that that, however is the removable shower and bubble plunger.

The shower has a nozzle under it that sucks water up from the bath tub, and by pressing the plunger, the water comes through the shower head. Much like the way showers work at the gym or on a campsite, without the recycled water part. The bubble maker has a whole on the top where you pour your shampoo or dishwashing liquid or whatever suits the doll you’re going to bath, and plunge, plunge, plunge and lo and behold, bubbles stream out of the side openings and fill the bath. 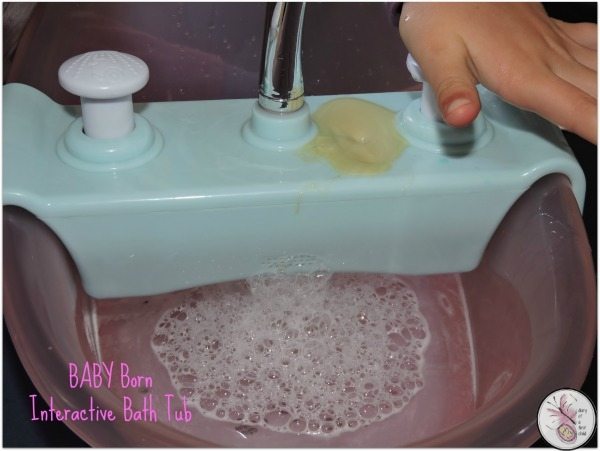 It’s a very clever system, and the children absolutely love it.

It does take a bit of effort to do, but even my five year old can manage it with a bit of grunting!

The sounds and lights come from the element underneath, with the lights actually shining up into the bath through the water, which is really fun – my girls had bath lights when they were smaller, and this reminded me that we should get some again!

In the video we actually forgot to switch it on, but there is music and bubble sounds. To be honest I prefer things without batteries, so while I like the lights, I don’t think they *need* the music.

Aviya loves this bath for her multitude of dolls, though when it came to bath time we realised that her baby dolls were all soft bodied, so they wouldn’t be able to bath, but she had other smaller dolls that all fit and play in the bath.

We also sometimes fill it with orbies – or aquabeads as we called them before YouTube! – as that’s a different sensory play experience, but equally fun and from my perspective, less messy, unless she squishes them all! 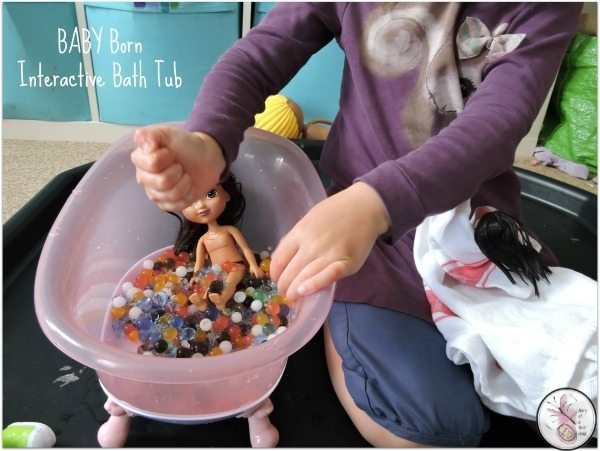 I do love the bath though as without the shower/bubbles it doubles as a dolls swimming pool which means I spend a lot less time washing my kitchen bowls that were always pulled into play.

I love the versatility of this toy and the fact that in can be incorporated into imaginative play without much effort.

It’s a winner for me (more so without batteries) and for my girls alike.

Watch the video to see for yourself!