Little Snowflakes is a blog I hate to love. She tidies her house. She has a plan. She works out and makes it sound like a good idea. And she proves that everything I say I can’t find the time or energy for is just an excuse. She’s bothersome and it’s totally my own fault – which is kind of why I love her blog. She makes me uncomfortable, which makes me get up and go pack the dishwasher and sort the laundry. Which, in turn, makes me feel good.

Sheryl also makes foods I add to my ‘must make’ folder and I don’t know if I ever will it’s just so healthy – but I love looking at them and imagining myself making Hemp Coconut Blueberry Muffins, or Avocado Kale Salad. 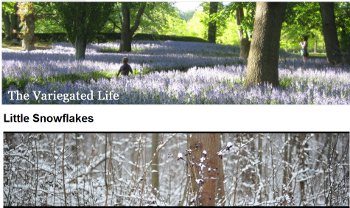 And that’s another thing: She cooks with Kale. Kale is my nemesis. It arrives in my veggie box and my heart sinks. I’ve not made a successful Kale recipe yet. I measure success by whether my huband finishes off his food or not. Kale. Grrrrr.

Of course, part of my ‘dislike’ is pure jealousy based on the fact that Sheryl owns a Vitamix. I so badly want a Vitamix that when I think of them, my heart aches a little. I’ve wanted one for months and months and months. Sigh.

In truth, though, Little Snowflake is a great blog, and it’s really easy to get lost in her pages once you start reading. I guess Sheryl is a few steps up the evolutionary ladder from me: she already does those things I’m still trying to grow into.

The Variegated Life is about a lot of things, but to me, it is about a journey of change. Rachael is trying to make small changes in her life, one thing at a time. And then there was the curveball, the big change she found herself pregnant with her second child. We’re due around the same time, and while she hasn’t written tomes on pregnancy, the bits and pieces that come through are interesting because we’re so close on the road, both expecting babies really soon, it’s been a privilege viewing the journey through someone else’s eyes.

As a Work at Home Mother, Rachael’s posts often speak to me. She writes about work-life balance, about changing and not changing and doing both and neither. She speaks poignantly, and in asking questions of herself, she makes me ask them too and often I find peace, and a little bit of giving myself a break, in her words.

Follow these bloggers for encouragement as you head into the new year and taking their examples, make your changes small, but consistent and successful