Despite having had an amazing home water birth with my first child, and having watched a few feature film lengths of birthing videos on youtube and around the web, whenever I think of childbirth, I still have the mental image of legs up in stirrups and nurses and doctors and pale looking fathers urging a screaming mother to ‘push, push,push!’ Such is the level of our indoctrination by TV, really!

The reality can and should be much different though. For a start, when a woman has sensation in her lower body, (i.e. hasn’t had strong pain medications) she knows all too well when to push. In fact, it’s physically impossible not to push. Your body just does it and there’s no stopping it.  The picture you see on TV is what happens when the mother-to-be has had an epidural and can’t feel the natural urges to push.  You then have a nurse, midwife or doctor looking at a screen to monitor when the contractions have started, and telling the mother to push.

What causes the natural urge to push?

The ‘urge to push’ is actually called the Ferguson Reflex and is the body’s response to pressure being applied to the cervix or vaginal walls.

According to Wikipedia, “Upon application of pressure, oxytocin is released and uterine contractions are stimulated (which will in turn increase oxytocin production, and hence, increase contractions even more), until the baby is delivered.”

What are different types of pushing and which is ‘better’?

There are two types of pushing in childbirth: spontaneous and directed. The Lamaze.org website describes the differences thus:

“When you push in response to the natural urge to push, it is called “spontaneous pushing,” meaning you are doing what your body tells you to do. This natural urge comes and goes several times during each contraction. Each of these bearing-down efforts or urges usually lasts from five to seven seconds. However, when you are directed by your caregiver and those around you to hold your breath and push to a count of 10 seconds, repeating this two to three times during a contraction, you are using directed pushing. 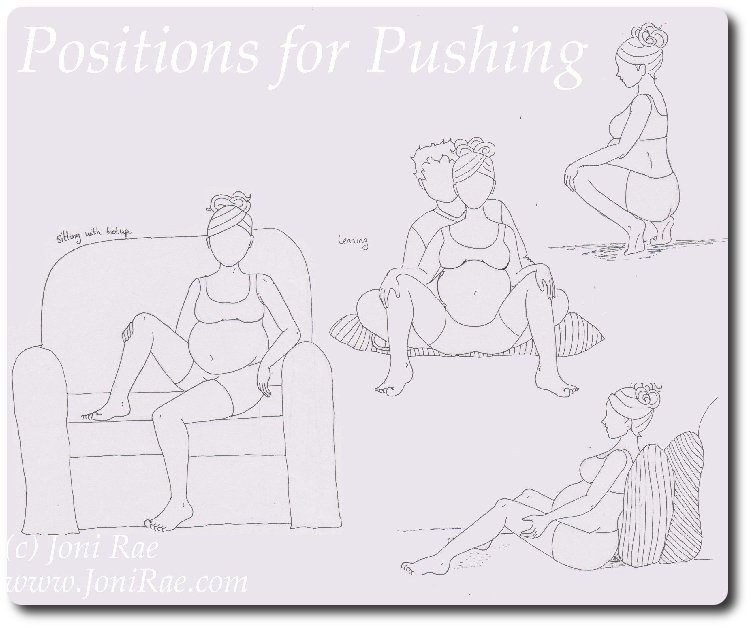 Responding to the urge to push with short periods of holding your breath in a calm, unrushed environment has many advantages. Your baby will get more oxygen through the placenta, you will be less likely to become physically exhausted, and there is less chance of damage to the perineum and the muscles of the pelvic floor in the vagina (Albers, Sedler, Bedrick, Teaf, & Peralta, 2006; Roberts & Hanson, 2007). If you are having a very difficult time pushing the baby out, directed pushing might help. However, pushing spontaneously will usually be easiest and safest for both you and your baby.”

In other words, pushing naturally allows your body to breathe naturally, which is better for your baby’s oxygen levels, leading to less fetal distress.  You are getting enough oxygen too, so you’re less likely to be as exhausted by the process. You’re less likely to tear or tear as much. The main thing here is to remain calm an in control of your breathing. If you start panicking, you won’t be controlling your breathing, which is an essential part of ‘breathing baby out’.

What are the dangers of being coached to push?

Studies have showed that mothers-to-be who had coached pushing in the pushing stage of labour may shave a couple of minutes off of the time spent pushing. But they risked a higher incidence of fetal distress and meconium stained amniotic fluid, which often leads to greater intervention. A different study also indicated that bladder problems were more frequent in women with coached pushing.

From the same study:

“The fetus experiences a decrease in oxygen saturation with Valsalva bearing down [coached pushing] that is not observed when the mother is supported to use spontaneous bearing down. More specifically, Valsalva pushing efforts sustained for longer than 5 to 6 seconds lead to alterations in maternal and fetal hemodynamics, such as a lowering of maternal blood pressure and blood flow to the placenta, decreased fetal pH and PO2, elevated PCO2, fetal acidemia, more nonreassuring fetal heart rate deceleration patterns with delayed recovery to baseline, and lower Apgar scores. “

When is coaching helpful?

In order to provide a balanced view, I’ve been trying to find some information on when coached pushing may well be useful, but there seems to be an overwhelming consensus that in a drug-free, natural delivery, it isn’t.  In a study published in the AJOG in 2005, “uncomplicated labors and without epidural analgesia were randomly assigned to coached (n = 163) versus uncoached (n = 157) pushing” found that the second stage was approximately 13 minutes shorter in coached labour, but no other benefits were found (and the negatives were still present.)

Of course, in use of pain medication such as an epidural, coached pushing is “required”as the mother can’t feel the contractions – despite the fact that there are a handful of cases of women in comas giving birth naturally, so I’m not really sure how ‘required’ ‘required’ really is either.

What are the dangers of premature pushing?

What about the reverse of pushing in transition? Pushing before dilation is complete?

Well, this is an interesting one for me, because when Ameli was born, I began pushing at 4cm and everyone kept telling me to stop pushing – something I was physically incapable of doing – because I was going to cause the cervix to swell and would end up with a caesarean. I’ve been reading about this and trying to understand more about why my body would be pushing when it’s dangerous to do so as that makes no sense to me and I have found an answer I’m quite satisfied with: It isn’t dangerous to push before you’re fully dilated.

The opening paragraph of an article on Midwife Thinking, called The Anterior Cervical Lip: how to ruin a perfectly good birth, really resonated with me:

“Here is a scenario I keep hearing over and over: A woman is labouring away and all is good. She begins to push with contractions, and her midwife encourages her to follow her body. After a little while the midwife checks to ‘see what is happening’ and finds an anterior cervical lip. The woman is told to stop pushing because she is not fully dilated and will damage herself. Her body is lying to her – she is not ready to push. The woman becomes confused and frightened. She is unable to stop pushing and fights her body creating more pain. Because she is unable to stop pushing she may be told to have an epidural. An epidural is inserted along with all the accompanying machines and monitoring. Later, another vaginal examination finds that the cervix has fully dilated and directed pushing begins. The end of the story is usually an instrumental birth (ventouse or forceps) for an epidural related problem – directed pushing = fetal distress; ‘failure to progress’; baby mal-positioned due to supine position and reduced pelvic tone. The message the woman takes from her birth is that her body failed her, when in fact it was the midwife/system that failed her. “

I am so grateful that my labour with Ameli progressed quickly from 4cm (which I was at after 44 hours, then 8 two hours later), as this could so easily have been my story. I am incredibly grateful that I had a birth advocate in my corner in the form of my husband.

The author of the above states that she has yet to find any evidence that ‘pushing on an unopened cervix will cause damage’. She too has been told that it will, but has never seen it in a woman without an epidural.

Gloria Lemay says the best way to avoid worrying about pushing before a woman is fully dilated, is by not checking dilation. There is no medical need for vaginal examination.  She says, “No one ever swelled her own cervix by gently pushing as directed by her own body messages. The way swollen cervices happen is with directed pushing (that is, being instructed by a midwife or physician) that goes beyond the mother’s own cues. It has become the paranoia of North American midwifery that someone will push on an undilated cervix. Relax, this is not a big deal, and an uncomfortable pelvic exam at this point can set the birth back several hours.”

She goes on to list outward signs of progress and transition, including spontaneous pushing, bearing down with each contraction, show, and the dark red line that extends straight up from the rectum when full dilation happens.

“An effective solution instead of focusing on pushing, is to focus instead on breathing the baby down.  You want the baby to drift as far as possible so that you both have the gentlest birth experience possible.  It’s preferable to let the baby drift into this world, rather than forcefully pushed into it.”

For more information on this topic, please read these incredibly useful resources:

The Anterior Cervical Lip: How to ruin a perfectly good birth

Herbs for use in Childbirth
Natural homebirth vs. Natural hospital birth
Said the Bitch to the Cow
Writing a Birthplan: The Where, The Who And The Documentation