I have been breastfeeding for a little over thirteen months now, and it recently dawned on me that I kind of just ‘trust’ the process to work, and have no idea how breast milk is made. This is a rather unnatural situation for me, as I always want to know the ins and outs of everything, so here goes.

First, however, a bit of a glossary of terms: 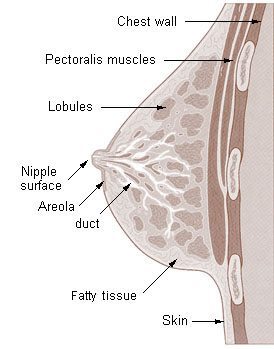 Alveoli – a small cluster of cells that produce milk

Areola – the dark bit around the nipple

Ducts – the ‘canals’ through which milk travels down to the nipples. There is one milk duct for every lobe.

Lobule – a cluster of alveoli

Lobe – a cluster of lobules. Each breast contains between 15 and 20 lobes

Milk Sinuses – little straw-like openings on the areola. When the baby suckles it creates suction causing milk to be released from the openings in to the baby’s mouth

Montgomery glands – small bumps on the areola which produce a natural oil that cleans, lubricates and protects the nipple during pregnancy and breastfeeding. This oil contains an enzyme that kills bacteria

Nipples – the bit that goes inside the baby’s mouth

Oxytocin – a hormone released by the pituitary gland when your baby latches on. It causes the muscles around the alveoli to contract and eject your milk down the milk ducts. This passing of the milk down the ducts is called the “œlet-down” (milk ejection) reflex. It’s also this hormone that provides the ‘rush’ of ‘love’ that people sometimes feel during breastfeeding.

Prolactin – also a hormone released by the pituitary gland which causes your alveoli to take nutrients (proteins, sugars) from your blood supply and turn them into breast milk.

How does it work?

When your baby suckles it stimulates the nerve endings in the nipple and areola, which signal the pituitary gland in the brain to release two hormones, prolactin and oxytocin.
The Prolactin causes the alveoli to take nutrients from your blood supply and turn them into breast milk. The milk is produced in the alveoli, which look like a very small cluster of grapes. The pituitary gland releases Oxytocin, which causes the muscles around the alveoli to contract, basically squeezing the milk into the ducts. Each lobe (cluster of alveoli) has it’s own duct, which leads to the areola.

Milk production is continuous, but let-down causes the milk to flow faster. Milk is already there and despite the fears of many mothers-to-be, the cases of there actually not being enough milk are extremely rare.

Linda J. Smith, a highly experienced lactation consultant, writes, “The significant inhibiting factors appear to be (1) breast surgery; (2) retained placenta; (3) Sheehan’s syndrome or pituitary shock; (4) hormonal contraception. If none of those are factors, it’s exceedingly rare than a mom won’t make plenty of milk. Rare situations DO exist, however.”

She also states that milk must be regularly and thoroughly removed from the breast for milk synthesis to keep ‘chugging along unrestricted’.

”Milk retained in the breast downward-regulates total supply to about 15-20% more than the baby takes on an average. The principle goes like this: if more than 80% of the milk is removed, supply increases to maintain the 80-20 ratio. If less than 80% is removed, supply decreases to maintain the 80-20 ratio. Of course this is an oversimplification of a very complex process, but this principle has held steady as new research emerges.”

So the moral of the story: give milk to get milk.

If supply is low, feed as much as your baby is willing, then express or stimulate the nipples. Understanding how the process works should demystify it. Our bodies were made for this and for most of us, it can and does and will work, if we leave it to do it’s thing.

Resources used in the writing of this document: