In May the children and I drove to Holland for a fantastic week of pretty luxury camping. Coming from the Isle of Wight the trip included 2 ferries, two accidents (others, not ours) and a motorway entirely closed for maintenance, the 8-hour trip took us closer to 14 hours. Fortunately I’m not a first timer to long journeys, so I was well prepared with car games, individual games, charged tablets and phones, extra cables for on-the-road charging and everything you could possibly need, down to the pencil sharpeners. And then, in a stroke of complete lunacy, I left the whole Trunkie filled with car games and rainy day games and activities neatly by the front door and didn’t realise it until we were on open water with no chance of going back to fetch it! Disaster, right? Well, it all turned out okay, in the end, as I managed to draw on a childhood of car travel in a life before travel-sized games and technology to make for fun travel that was more about the waffle-stop in Belgium than about just reaching our destination. 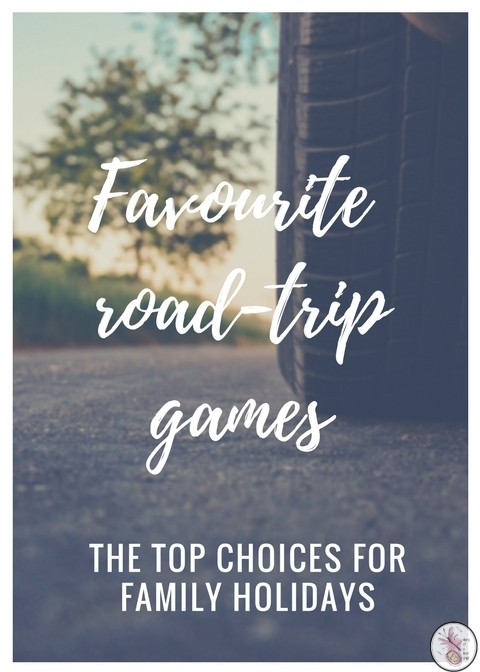 According to a recent survey by BP, I’m not alone, either! Of the 2000 drivers surveyed, a surprising 28% said that in-car games were the best way to keep harmony during travel, compared to 26% that use gadgets and technology to do the same. (Even though 46% do actually allow kids to use gadgets and screens for the sake of some peace and quiet. Personally, I feel on a very long drive there’s room for both games and gadgets! All about balance!)

Fortunately 7 year-old Ameli pretty much always has a notebook and pens on her, so once we reached the Continent, we were able to create our own game – a sort of visual bingo-slash-ongoing-points-based-I-Spy. We made a list and ascribed points to things like cows, windmills, scarecrows, graffiti, and bodies of water, so that for a full hour, we were all looking out the window and trying to spot things to make up points. The rules developed along the way, too: you couldn’t for example see 20 cows and expect 20×10 points. You also couldn’t see cows, and 30 seconds later see more cows – you had to ‘spot’ something different in between for the next lot of points to count.

We quickly filled up a page with our points and were able to adapt the things we were spotting as we moved between countries. France had a lot of graffiti, Belgium a lot of historical road signs, Holland occasional windmills or wind turbines. It was great fun!

Other games we played included I Spy and spotting different coloured cars – and it turns out that those are among the favourite in-car games to play.
BP’s 2000 respondents chose I Spy, Spotting different coloured cars, counting similar objects (cows, bridges), “The Animal Game” (naming an animal beginning with last letter of the animal shouted out by the person sitting next to you) and “Name that tune” as the most popular in-car games to play.

The BP Ultimate research found that so important is music that almost half (42%) of drivers admitted song choice has caused arguments – while a third (37%) actually use it to end in-car squabbles. Well, I don’t get a look in. I like to listen to Rammstein while driving, but I’m lucky if I get an hour of it before we return to Taylor Swift and kin! I even broke out an old “S Club 7” CD I found in the bottom of a box recently. For shame.

Long drives, while less daunting than long flights, can still be a bit of a nightmare at times, so having a good attitude and a healthy supply of entertainment, and working in enough stops to satisfy little people all work together to make the journey part of the holiday, which is an added bonus. If you want to find out more and see where your in-car favourites rank, head on over to BP Keep Britain Moving where you can download colouring activities and games as well as a Spotify playlist to help you make the most of your journey.